Yesterday I somehow® managed to break my computer.

I'm still not a 100% sure how I managed to do this, but it somehow went like this: During a regular dnf update operation I noticed that I still have fprintd installed, which I do not use since the notebook is in some kind of docking station or my Roost stand most of the time.

So – I went ahead and uninstalled fprintd.

Which lead to a new issue: An occasional

popping up in the system logs. Not a big deal, but why wouldn't I scratch that itch?

So removed all occurrences of fprintd in my /etc/pam.d/* files. Somehow dnf is supposed to clean up those files after removing a pam package, but there are some known bugs.

While I was cleaning up the fprintd residue, I noticed that my pam config still has gnome-keyring-daemon listed. A leftover from when I was still using GNOME full time. Well, I removed those lines as well.

Those changes went unnoticed until the next dnf update a few days later when I installed a kernel update and had to reboot my machine.

After rebooting my system felt sluggish. Not in a "high system load" way, more like it was constantly running into timeouts when launching apps.

More precisely: when launching GNOME apps like Nautilus, Pavucontrol. They did open up eventually, but only after 30-60 second timeouts.

When my Nextcloud client opened up it's "Cannot connect to nextcloud: the credentials are missing" window, I at least know where to start my search.

Apparently I managed to break GNOME Keyring. I could still launch Seahorse, but I could no longer unlock my login keyring. 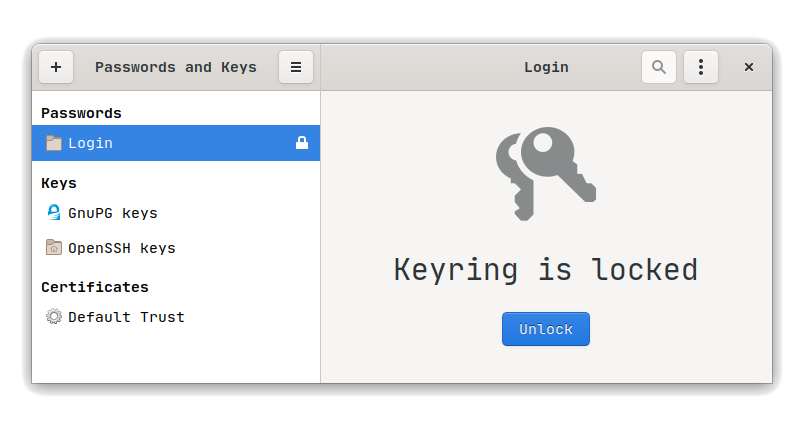 Clicking the Unlock button would do nothing. and I would see multiple instances of

It looks like GNOME keyring daemon could no longer be unlocked since it failed to open it's password prompt. Up until now I was manually unlocking the GNOME Keyring on every login. Weird.

Well, remember how I cleaned up my PAM config earlier? Turns out – GNOME keyring was messing with PAM.

Apparently a lot of tiny little cogs - including DBUS, systemd, GNOME Keyring Daemon and PAM are turning in the background to give users a neat experience.

Which is fine if you never mess with any config file yourself. But I hate those tiny little hidden cogs, since I like to roll my own dotfiles and want to bolt down every lose config flag.

I ended up with the following fix: Up until this week I ran gnome-keyring-daemon from the same script that launched sway. Which worked – yet I still have no clue as to why it worked, since it launched the daemon before anything like $DISPLAY is set.

Now I've moved the initialisation of gnome-keyring-daemon into my regular autostart file, which fires up graphical programs.

(I don't need the SSH agent from GNOME Keyring since I am using customer-specific SSH agents, but that's a whole other story)